Entertainment for everyone: How Idaho theaters are accommodating viewers with disabilities

Whether it’s being transported to Harlem in the roaring twenties, or Denmark in the middle ages, live theater invokes a sense of immersion that’s difficult to explain in words.

As the music booms and dramatic scenes take shape on stage in front of you, it might be hard for some audience members to get in on the action. Specifically, those who cannot hear or see the performance.

That’s where accessibility features like subtitles and interpreters come in, giving those with disabilities a better experience at theaters, cinemas, and concert venues.

"We've had several deaf people say it makes such a difference that they continue to be engaged in different ways and they really appreciate that thoughtfulness," said LaVona Andrew, coordinator of the “Signing Shakespeare” program at the Idaho Shakespeare Festival.

She says accessibility features aren’t new in larger production houses, but for a smaller company like the Idaho Shakespeare Festival, it’s bringing access where none existed before.

The Bureau of Labor Statistics predicts that the job outlook for sign language interpreters will increase 24% nationwide by 2030, making it one of the fastest-growing occupations in the country. Over the next eight years, the BLS predicts nearly 20,000 interpreter jobs will open up.

Take a quick look at your favorite entertainment spots, and you’ll find that many venues are now implementing these features at most shows.

“Signing Shakespeare” began in 2010 to add a new access point for some audience members. In 2018, the Festival added real-time captioning to its theater.

As of now, the Festival is working on bringing sign language interpreters and real-time captioning to every show.

But with staffing shortages, COVID-19 outbreaks, and difficult seating arrangements, bringing these features to the audience isn’t always possible. This issue peaked during its recent run of the musical, Ain’t Misbehavin’.

"We don't have the capacity to do an interpretive performance after because we had already filled up the sections that we would normally hold so that our deaf and hard of hearing audience could see the interpreters and really enjoy that experience," Hannah Read Newbill, the Festival’s Marketing Director

Under Title III of the 1990 Americans with Disabilities Act, theaters are required to make some effort to accommodate deaf, hard of hearing, blind, and visually impaired visitors.

Most venues meet the requirements, but often don’t do enough to make the experience equitable.

"Often, deaf and hard of hearing access is an afterthought," said Steve Snow, the executive director of the Idaho Council for the Deaf and Hard of Hearing. "I think the industry, in general, doesn't realize that access is not universal, that they actually have to put a thought into it."

In theater, that’s especially true with older plays, where early English words don’t exactly translate into modern sign language. We don’t use Shakespearean words like “ere,” “bawd” and “forsooth” off the stage, so they don’t have direct American Sign Language translations.

Additionally, creating an interpretation takes a lot of planning ahead, including for the people needing the services.

Attendees looking to use services like interpreters or captioning often request them with short notice, putting theaters in a bind. If the services aren't offered universally, its possible that.

"[Theaters] have to seek out those resources, prepare a script, give the interpreters time to prepare," Snow says.

Accommodations like this, however, aren’t just for those with disabilities. People without hearing or vision impairments can benefit from accessibility services.

"We have people who buy season tickets for interpreted nights and sit a little further off, and so they're not in the deaf section taking seats, but they do it because they feel that it enhances the show for them too," Andrew said. She said that added benefit isn't planned; it's purely coincidental.

Though accessibility features still vary from venue to venue, ensuring everyone can enjoy live entertainment brings the worlds of people with differing abilities a little closer together.

"The deaf community loves being involved in the arts, just as any hearing community member would, so any type of entertainment," Snow said. 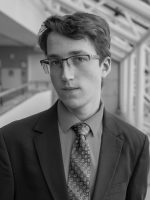