A History of the Boise Public Library: 125 Years of Service 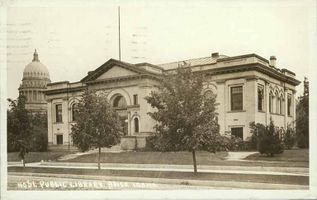 Boise Public Library is celebrating 125 years of continuous service throughout 2020. Join us for the kickoff event and hear a presentation on early library history presented by Historian, Tully Gerlach. Boise Public Library traces its roots to February 18, 1895, when the women of the Columbian Club opened a subscription library and free reading room in City Hall. For 10 years, the Club kept the reading room alive while helping to secure funds from Andrew Carnegie to construct a true public library. Boise's Carnegie Public Library opened its doors at 815 W. Washington on June 22, 1905. The library remained at the site on Washington Street until April 27, 1973, when it moved to its present location at 715 South Capitol Boulevard. Then in 2008-2009 three library branches where opened and in 2017 the newest branch library opened.