Reporting from McCall – here are some of the stories you wanted told.
Music

I've recorded over 500 Tiny Desk concerts and, of course, have countless favorites. But which sound the best? Well here they are, according to me — the guy mixing the performances and bopping his head along just off (and sometimes on) screen.

We ask a lot of the artists who come to play at the Tiny Desk — they aren't allowed monitors, or lights (well, except that one time), or a PA system. Gone are performance riders demanding no brown M&Ms or a huge support crew. They simply play, with the general rule to do so quietly enough for an audience to hear singing, unamplified, over the instruments. Because of this, musicians have to strip songs down to their essence — the music should sound like it did when it was created, before producers and computers put their grubby hands all over it. (Just kidding! There is, of course, lots of room for creatively produced studio albums too.) The best Tiny Desk Concerts exist on their own terms and with their own rules — and often can reveal the raw talent of those who perform here. They are only trying to be exactly what they are.

Identifying my first pick for the best-sounding Tiny Desk was easy: The pared-back music of Bogotá's Latin-Europeon-infused Monsieur Periné. I remember the group's gear pouring out from behind the desk like a clown car, so suggesting three singers share one mic was the only possible solution, due to our self-imposed limitation of 16 audio tracks.

Another was when violinist and professional whistler Andrew Bird stopped by — his drummer Ted Poor taught me that a Cookie Monster stuffed animal makes the perfect snare dampener. (We didn't get the chance to try using the actual Cookie Monster when the whole gang was here.)

Neo-soul singer-songwriter Nick Hakim made me realize the quietest Tiny Desk shows are usually my favorites. The vocals on his 2017 release, Green Twins, are doused in lush chorus and delay, but there's something about his hushed and un-processed voice that allows you to really lean into the lyrics and focus.

Blues-rock gods Tedeschi Trucks proved that 11 talented musicians can create a cohesive sound together... without monitors. It's hard to believe the guttural tones Derek Trucks was able to summon from his electric guitar at such low decibels. Every one of the musicians carved out their own unique timbre in the mix. After riding levels and adding EQ, no one encroaches on anyone else's sonic space, and it's bliss.

Visionary keyboardist and songwriter PJ Morton, of Maroon 5, convinced me that last-minute inspiration can make magic — like when he asked if we could squeeze a 10-piece string section behind the desk the day before the show.

Tiny Desks In This Playlist

Josh Rogosin also writes our Tiny Tech Tips column, in which he brings his expertise to bear on the everyday audio gear we regular folks use, like headphones and ear plugs. 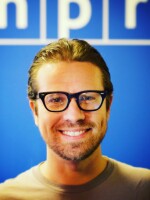 Josh Rogosin
Josh Rogosin (he/him) stumbled into NPR HQ in 1999 on his way to mixing shows at The Shakespeare Theatre in downtown DC. Since then, he has been at the controls for all of NPR's flagship newsmagazines and gathered sound in far flung places like Togo and Benin, West Africa, Cambodia and Greece for the Radio Expeditions series. He has engineered at NPR West and NPR NY and spent two years as Technical Director at Marketplace Productions in Los Angeles. He served as Senior Broadcast Engineer for New York Public Radio and Studio 360, and was an originating producer and sound designer for NPR's Ask Me Another.
See stories by Josh Rogosin
The Latest From Boise State Public Radio
Idaho Wildfire Tracker
Get information about current wildfires across Idaho, including emergency evacuations, smoke and air quality.
The Latest