A new study reveals how much water the U.S. uses in energy production. The answer is a lot – 58 trillion gallons. The data breakdown may be critical information for the Mountain West, where energy industries are big, but water can be scarce.

The amount of water the U.S. energy sector used in 2014 was equal to about 88 million Olympic-sized swimming pools. That was about 10 percent of overall water consumption in the U.S. that year. The number surprised the study’s lead author,  Emily Grubert, a civil and environmental engineer.

Grubert said most people in the field would have guessed it was between 5 and 6 percent, “so seeing that come out at 10 was actually pretty surprising.” 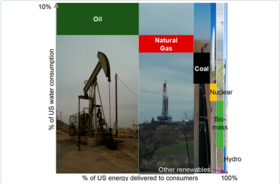 Not surprising, however, was the data that showed conventional energy production like oil, coal and nuclear energy have very large water footprints, though, these sectors largely use lower quality “produced” water rather than fresh water. But certain alternative energies were also water guzzlers, like hydroelectricity, said Grubert.

“One thing we don’t necessarily think about when we think about hydroelectric power is actually those reservoirs evaporate quite a bit of water.”  Especially, she said, in warm, dry parts of our region.

Ethanol also topped the list because of the amount of fresh water needed to irrigate the corn that’s used to produce the fuel.

Wind and solar, on the other hand, are renewables that require little to no water at all.

This story was produced by the Mountain West News Bureau, a collaboration between Wyoming Public Media, Boise State Public Radio in Idaho, Yellowstone Public Radio in Montana, KUER in Salt Lake City and KRCC and KUNC in Colorado.