Giving Up Guns: High-Risk Veterans Are Ready To Talk About It

Lynn Rolf III owns a lot of guns, but only one makes him stop and think whenever he sees it.

“I’ve had conversations with one of my pistols numerous times about how easy it would be to put it in the mouth,” he said. “Pretty one-sided.”

Rolf had those conversations inside a “dark tunnel” he fell into after returning from a deployment to Iraq shortly after the war began in 2003.

Rolf, 45, eventually left the Army and found work as a military contractor. He was recently diagnosed with post-traumatic stress disorder and received treatment. Now when he sees that gun he thinks about how the bad parts of his life are outweighed by the good. Rolf thinks about his fiance and his job with the VFW. He thinks about chasing critters with Boomer, his hunting dog, at a cabin on a lake near Fort Leavenworth, Kansas.

Although Rolf sought out mental health resources and avoided tragedy, many of his fellow veterans don’t.

Many of those suicides involve firearms, and research has shown that reducing access to means of suicide can help prevent what is sometimes an impulsive act.

And there’s a growing body of research that people like Rolf should be talking about guns – with their doctor. 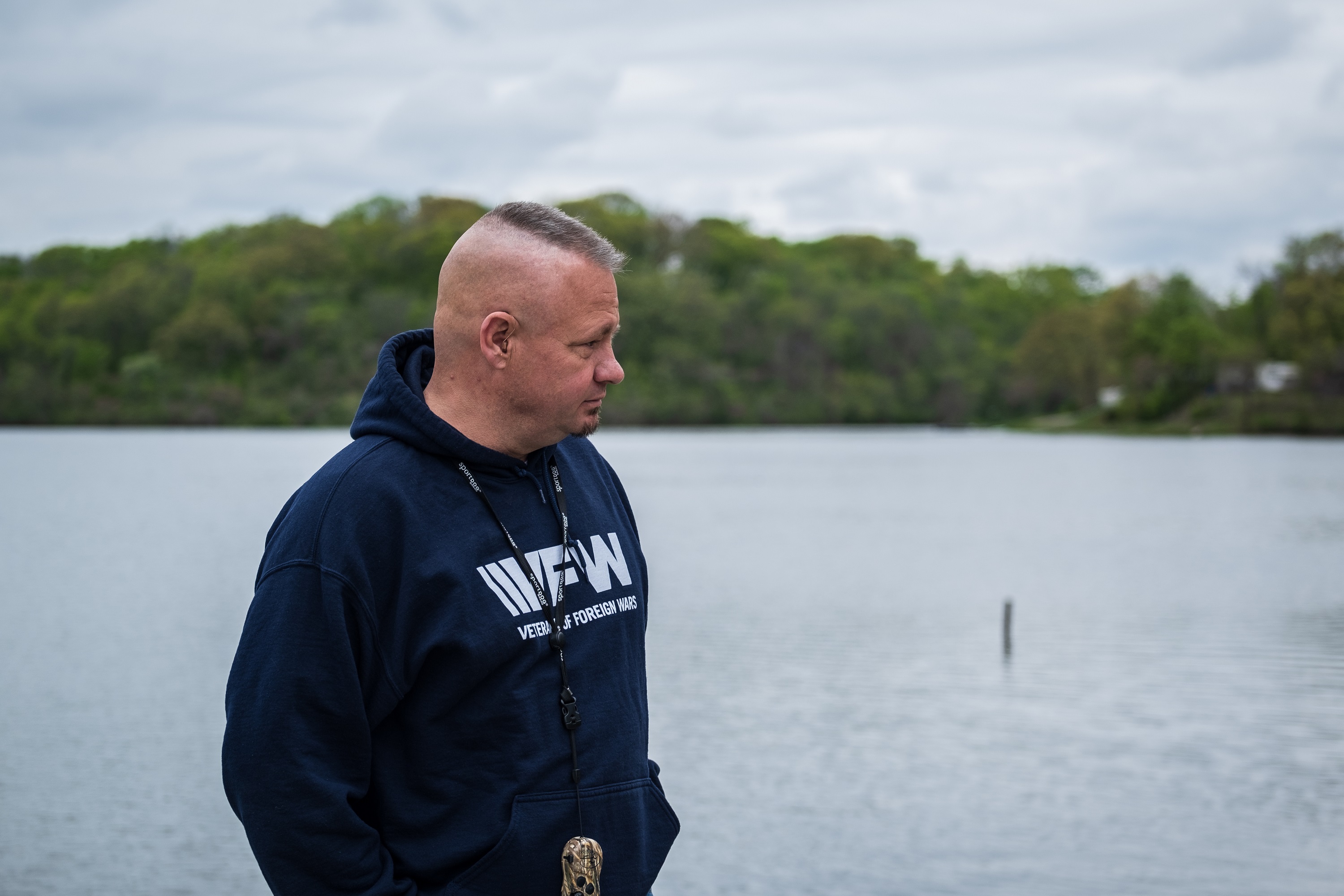 Lynn Rolf III said rumors that a PTSD diagnosis could endanger his security clearance were one reason he delayed seeking mental health treatment.

“It’s very clear that veterans are at higher risk to die from suicide [than the general population],” said Dr. Marcia Valenstein, a researcher, psychiatrist and professor emeritus at the University of Michigan. “Veterans with mental health conditions are at even greater risk.”

Many doctors worry their patients will get mad if they try to talk about guns, Valenstein says. For VA doctors working with patients who were in the military, that concern is amplified because veterans are perceived as being more conservative and unwilling to part with their weapons.

Valenstein and a team of researchers surveyed VA patients who had already received mental health treatment. They asked how open the veterans might be to a series of interventions, ranging from basic screening questions and free gun locks to temporarily storing their guns with family members or in a VA-managed program.

The results were surprising: 93% of respondents were open to a low-intensity technique, such as talking about guns with their doctor. About 75% of veterans also endorsed at least one of the more intensive options.

“I think this is pretty clear that this is a positive response from veterans and high-risk veterans in mental health care,” Valensten said.

The key factor, she says: making these interventions voluntary. 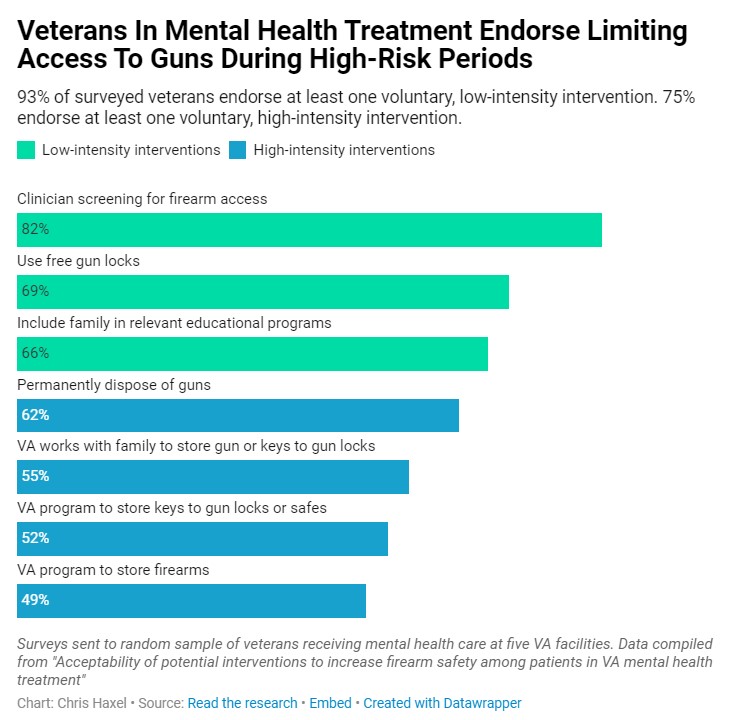 Veteran outreach also helps. For example, Rolf said he was initially afraid to seek mental health treatment because of persistent rumors that he might lose his security clearance over a PTSD diagnosis. He later learned that happens only in very extreme cases.

Department of Defense statistics bear that out: Between 2006 and 2012, about 85,000 people had their security clearance denied or revoked. Only 145 of them lost clearance for mental health reasons. 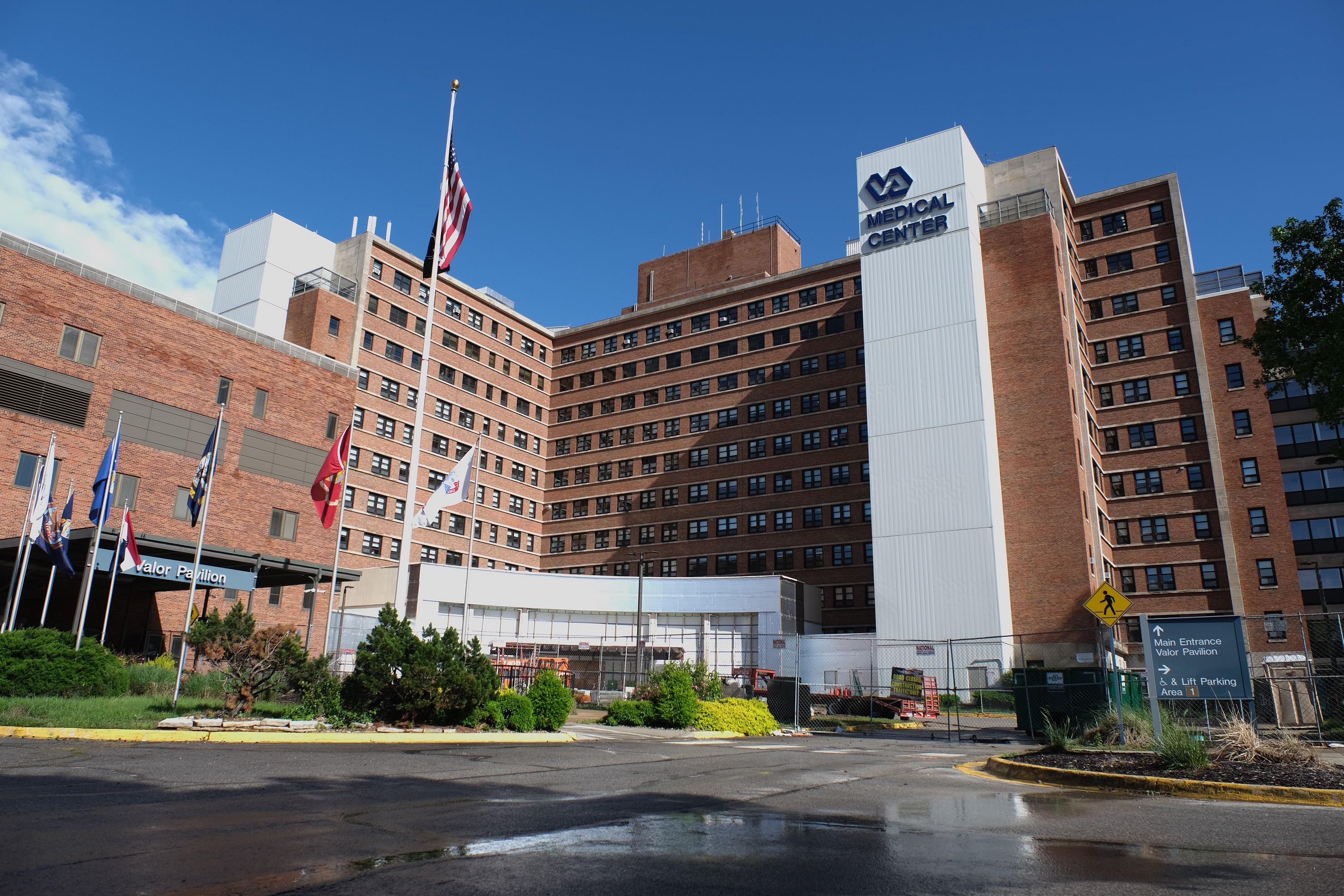 The VA Medical Center in Kansas City, Missouri. In 2016, 69% of veteran suicide deaths resulted from a firearm.

The VA did not respond to a request for comment, but the organization funded Valenstein’s research. It has also stated its intent to prevent suicide by putting “time and space” between veterans who express thoughts of suicide and their firearms.

President Donald Trump in March established a veteran suicide prevention task force to be headed by the VA, Department of Defense and several other cabinet-level federal agencies.

The move followed a federal report that found less than one percent of the VA’s $6.2 million budget for suicide prevention outreach in 2018 was actually spent.

Resources if you or someone you know is considering suicide: