Gun sales continued to mushroom in June, apparently due to a confluence of Joe Biden’s surge in polls, the spread of COVID-19, and ongoing protests against police brutality and racial injustice.

Americans bought 2.4 million firearms in June, according to industry estimates from Small Arms Analytics & Forecasting. That is a 145% increase from June 2019. Handgun sales make up the bulk of those estimates and increased at an even higher year-over-year rate of 178%.

The FBI’s National Instant Criminal Background Check System processed more than 3.9 million firearm background checks in June, a monthly high since the FBI began reporting these statistics in 1998 and a full 70% increase over the same period last year.

Gun sales started to climb sharply in March, according to industry estimates, and continued to boom in April and May. June saw nearly 900,000 more FBI background checks than an already-high May.

The increase in sales concerns some safety advocates. Higher availability of guns could lead to an increase in violent crime like homicide, according to the Harvard Injury Control Research Center. Advocates and public health experts have also warned of the increased risk of domestic violence and suicide, especially in the midst of the pandemic.

It’s unclear if the spike during the pandemic, especially in June, was driven by new gun owners or existing owners adding to their collections. Experts have said they worry more about increased violence if data show an increase in new gun owners, as it expands the base of gun ownership. 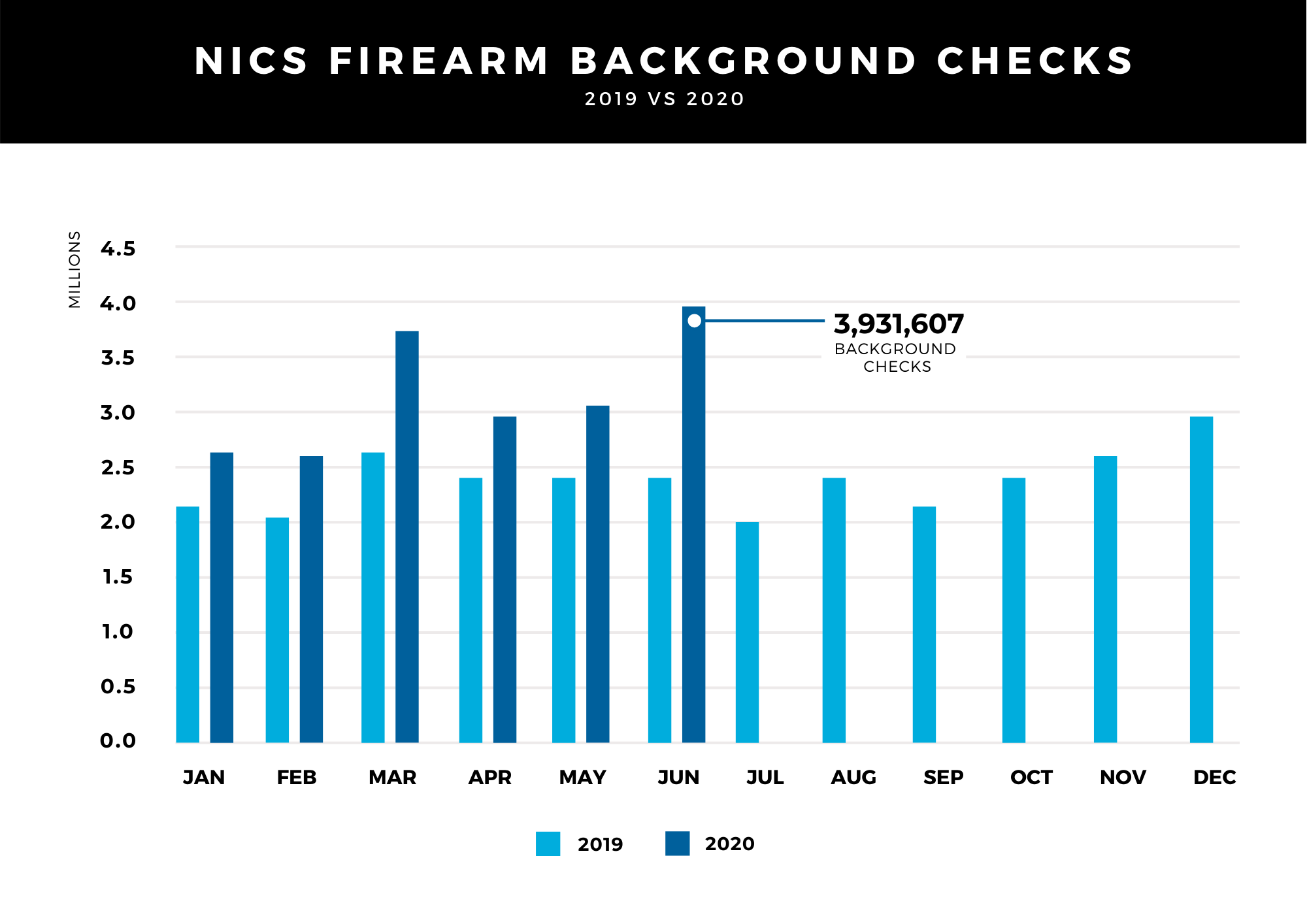 Spikes in gun sales are often tied to politics. Gun sales rose during President Barack Obama’s eight years in office and hit a slight pause during the beginning of President Donald Trump’s administration. Gun advocates fear Democrats are more likely than Republicans to enact restrictive legislation, which tends to drive sales when Democrats are in power — or perceived to be coming into power — because there is a fear that it might become harder to purchase a firearm in the future.

That trend had already started as far back as late 2019, perhaps as polls began to show Biden as a formidable challenger to Trump.

“What we are seeing now is an intensification of that trend,” said Philip Cook, a Duke University professor emeritus of public policy studies and an expert on firearms policy.

The onset of the coronavirus appeared to drive sales in March, particularly as some local governments shut down gun stores. Protests supporting the Black Lives Matter movement may have helped drive even more sales in June, according to SAAF Chief Economist Jurgen Brauer.

“Relative to same-month sales in June 2019, firearms sales soared yet again in June 2020. Once more, demand was particularly strong for handguns,” Brauer wrote in a press release. “The first week of June saw especially high background check volumes, presumably related to the aftermath of the killing of Mr. George Floyd.”

“The idea that the pandemic may lead to scarcity, and all out chaos, may contribute to [sales],” he said. “The thinking that, ‘I’m going to be ready for the apocalypse if it comes.'”

Gun Sales Continue To Boom During The Pandemic

Gun sales continued to boom in May, the third-straight month with a spike in estimated sales.

Listen
Listening...
/
0:48
Click 'play' to hear the audio version of this story.

Gun sales continued to surge in April amid pandemic fears, marking the second consecutive month the industry has seen a massive year-over-year spike.

Fears of the impact of coronavirus have seen gun sales shoot up. Some first-time buyers say they’re turning to guns to keep their families safe, though the presence of a gun has been linked to an increase in violence.