Around 60 percent of the land in Idaho is controlled by the federal government. And some people would like those national forests and rangelands transferred to state control. 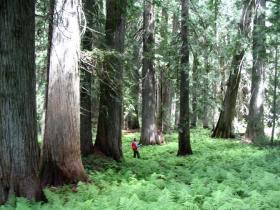 But Idaho Attorney General Lawrence Wasden told a crowd of tea party conservatives in north Idaho on Saturday there’s a good chance the state would lose that effort in court.

Take the land so the state can decide whether to allow logging, grazing and mining is an incredibly popular idea among Idaho’s ultra-conservatives, like the ones who attended the annual Liberty Summit in Coeur d’Alene.

Wasden said he sympathizes with the frustration over the federal government’s vast land holdings.

“It is a true and powerful economic impact on the state of Idaho,” he said.

But he said making a legal argument to transfer the land faces significant hurdles.

First, federal law trumps any law the state could pass. Also, Wasden said Idaho gave up claim to the land -- “forever” -- in its state constitution.

“We can’t even change that provision of our own constitution unless Congress agrees,” he explained to the crowd. “I mean, that’s just what it says. I’m not telling you what I like, I’m telling you that’s what it says, OK?”

Wasden said other western states have looked into a federal land transfer and have run up against similar roadblocks.

Still, Wasden organized a committee made up of other state attorneys general to look into legal avenues. The committee includes Washington’s Democratic Attorney General Bob Ferguson.

Some Western Republican officials say their states are missing out on revenues and opportunities to prevent wildfires because they don't have enough control over public lands.

The gathering follows an announcement last week from another group of Western officials who said it's time they manage federal lands rich in natural resources.

But critics are questioning where states will find resources to manage vast ranges.

The Legislature's Federal Lands Interim Committee has hired outside legal counsel even though the state attorney general's office has questioned the legality of Idaho being able to take control of public lands away from the government.

The committee is relying on the Legislature's Legal Defense Fund to cover the private attorney's costs. So far, Idaho has paid the attorney nearly $26,000.