The worst train in America is right here in the Northwest: the famed Empire Builder.

It’s been around since the early 20th century and takes passengers from Seattle or Portland past vistas in Glacier National Park and the Rockies, all the way to Chicago.

But the sudden rise in freight traffic in and out of North Dakota's oil fields has made the Empire Builder the country's most unreliable train. 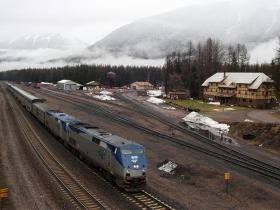 “There was a time when you could set your clock, as they say, by the Empire Builder,” says Amtrak spokesman Marc Magliari.

Clearly, that time has passed. The Empire Builder's on-time performance rating is the worst in the country: 31 percent for the last year. In December, it dipped to 15 percent.

“This is extremely frustrating to them and to us," he says. "And frankly can hurt future business. You'll get people who'll say 'never again' after going through that and you and I can certainly understand why.”

The Empire builder is Amtrak’s most popular overnight train with 500,000 passengers per year. But lately ridership has declined.

Amtrak is in talks with BNSF, which actually owns the tracks and decides which trains go and which trains wait. Some of the snags are temporary, like weather and track closures. But the longer-term problem facing passengers is that the Empire Builder uses the very same set of tracks the booming oil industry needs to transport long, slow-moving freight cars -- and that shows little sign of letting up.

Where the money is: freight

The whistle of passing freight trains can be heard several times each hour in Charles Mutschler's office in the library of Eastern Washington University. Mutschler is the archivist here by day, but by night he's an avid train historian. He has a handlebar mustache and he can tell you everything you want to know about trains - past and present.

At least once a year, Mutschler takes the Empire Builder. But he knows not everyone wants to go down to the station to catch a train that leaves at 2 a.m.. And Mutschler worries the massive delays could make train travel even less appealing.

“I don't think it's a good thing," he says. "But I think there's a reality element to this.”

The reality being the primary function of trains.

In the U.S. it’s not moving people, it's moving stuff. And before you get too nostalgic, Mutschler says even back in those sepia-toned days of train travel’s past, the big money was always in freight.

“So from the business perspective of the railroad industry, they're all looking at what is going to pay them the most profit at the end of the day and passenger trains, alas, have never been in it.”

The National Association of Railroad Passengers has asked the U.S. Secretary of Transportation to step in to ensure BNSF gives Amtrak trains priority access the tracks. This is a priority Congress wrote into law back in the '70s when Amtrak was created.

But it’s been a toothless law. A 2008 effort to give Amtrak more enforcement authority was struck down last year in a federal court.

In a written statement the BNSF says passengers are a top priority for the company and that it’s spending $900 million to, among other things, build a second track in western North Dakota. This should increase capacity.

A long night in Spokane

At 2:45 a.m. at the Spokane train station, the janitor has just started vacuuming and Tracy McKee is taking stock of how much food she has.

“We have three apples, three water bottles, a few crackers and a couple handfuls of nuts," she says. "I guess we'll start rationing out -- three nuts every 15 minutes or something.”

McKee is in for a long night. She's here with her two kids, 11-year-old Cole and 14-year-old Katie. They were supposed to be boarding the overnight train to Portland, where McKee’s older daughter just had a baby.

But the train is delayed. By five hours.

The delay might not be so bad if other things hadn't gone wrong. On this particular night, Amtrak can't find a charter bus to take the passengers. And for some inexplicable reason the Amtrak text notifications McKee signed up for never went out.

McKee looks up the nearly deserted corridor. Spokane's train station is known for being not the sort of place you want to take your kids in the middle of the night.

“There's a guy sleeping over there," McKee points out. "Completely comfortable. I'm not. I'm not.”

Across the station, Joel Yallup fortifies himself behind his duffel bag. He tells me this place is “hunting grounds” for drug dealers and muggers.

“You've seen the characters all running around here, all amped out and stuff,” he says.

Yallup travels a lot to construction jobs. He opted for the train to Pasco tonight because he thought it would be faster and more comfortable than a Greyhound bus. He now sees he was wrong.

“Public transportation is just going to hell, you know.”

By 7 a.m., sunlight floods into the station through the windows. Passengers with rolling bags fill the waiting area where McKee and her kids spent the night.

They are also all a little poorer from emptying their change into the vending machines. At some point during the night, security escorted three transients out of the station.

And there may be more car games in their future, only, in the car. Just before McKee and her family finally board their train, she says next time she's probably driving.