Summer Jobs Programs Aim To Keep Teens Out Of Trouble. This Year, That Work Is Moving Online

In cities like Denver, Detroit and Chicago, summer jobs programs are a key strategy in youth gun violence prevention. But this summer, the pandemic is forcing many cities to scramble to move these programs online while dealing with budget restrictions.

Nevaeh Casanova, 18, has participated in Denver’s Summer Youth Employment program for the past four summers, a connection that began when she was arrested for shoplifting at age 13.

“Getting in trouble was one of the big highlights because it got me where I am now,” she said.

Nevaeh was put on Denver’s Juvenile Diversion Program, an alternative to traditional court proceedings. Through that process her shoplifting ticket was dismissed and taken off her record. As part of diversion, the city placed her in a job at the Boys & Girls Club, where she has staffed the front counter, helped out with lunch, and taught kids peer-mentoring skills.

Growing up, Nevaeh was extremely shy. She had trouble ordering her own food at restaurants; at school, she struggled to be around other kids. Working at the Boys & Girls Club, along with other components of the program, helped her overcome that shyness.

“I just feel like the summer job definitely helps me learn different experiences,” Nevaeh said. “Helps me learn how to deal with people better because there’s always going to be different people in everything you do. Not everybody is going to be the same.”

This employment also helped her stay out of trouble. Nevaeh says her extended family members are involved in gangs: She hears gunshots in her neighborhood “all the time,” and says a shooting happened in her parking lot when she was a kid. If Nevaeh didn’t have caring parents and the support of city programs, she thinks her life may have been different.

“I could definitely have gone the other way instead of going into the path I’m at now,” Nevaeh said. 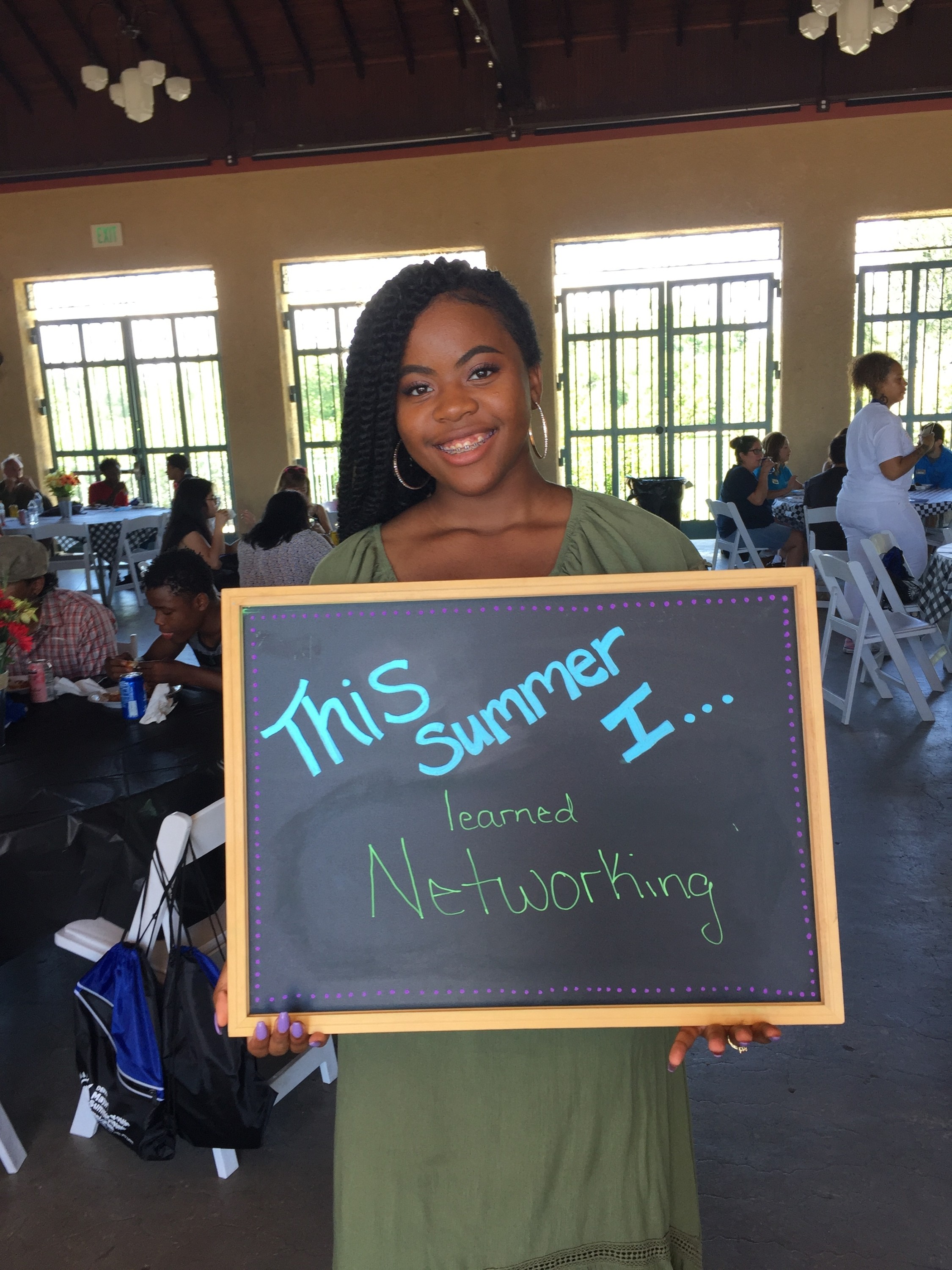 “From a youth violence standpoint, we do see it as an important strategy. It absolutely is,” said Pat Hedrick, director of Denver Public Safety Youth Programs, which partners with Denver Economic Development and Opportunity to support youth employment.

A small number of studies examining summer employment programs suggest they are associated with a significant drop in arrests for violent crime. In one study, published in the Review of Economics and Statistics, found that violent crime arrests among kids in Chicago’s summer jobs program dropped by 42% in the first year following employment but no significant changes in other types of crime.

“Anecdotal evidence from employers provides another hypothesis for why violence, which by definition involves conflict with other people, may change: Employers report helping youth develop self-regulation and respond positively to criticism, which could reduce conflicts outside the workplace as well,” researchers wrote.

But with social distancing requirements still in place and many businesses closed, summer youth employment will look different in many cities over the coming months.

“With so much unknown, the city made a decision to go ahead and move to a virtual platform to ensure there would be programming,” Hedrick said.

In Denver, the plan will include more young people than usual, but fewer hours of work. Around 375 teens will receive a stipend from the city for completing an online curriculum focused on career development skills, like how to communicate with a manager and write a resume.

“As it has been no simple task to transform this program due to the lasting impact of COVID-19, FACE has worked very hard and developed a number of paths forward to ensure that this resource is available to youth in the Denver community,” Subiadur wrote in an email.

The city departments backing summer employment are working to get this year’s proposed plan to Denver’s City Council so they can vote on it.

Other cities around the country are also scrambling to adjust. The New York City Council is working to fund its youth employment program — following an uproar after initially canceling it. Washington, D.C. is taking most of its program virtual, as are cities like Chicago, Philadelphia and Atlanta.

But this shift to virtual does have its downsides.

It is those soft skills that may make the greatest difference in outcomes, according to a 2017 study from the Brookings Institution.

“The one thing that is correlated with a reduction in crime is improvements in soft skills,” said Alicia Sasser Modestino, an economist at Northeastern University and author of the Brookings study. “They get to practice them on the job before they become disconnected from school or the labor market … it’s really the long-term behavioral change that is driving the reduction in crime.”

This summer, young people are up against a lot. In May, unemployment among teenagers aged 16-19 was at 30%, more than double what it was compared to May 2019. Some kids may be competing with adults for work. Many available positions are risky front-line jobs.

So there may be upsides to summer jobs programs going virtual. Modestino says virtual programs may be able to serve more young people — these programs are usually in high demand.

“I know from working with my peers online, there are ways to write a proper email to get a good response and other ways that don’t,” Modestino said. “And youth will be learning those kinds of skills in the virtual space, which isn’t a bad thing knowing how in the professional world we rely on those kinds of communication.” 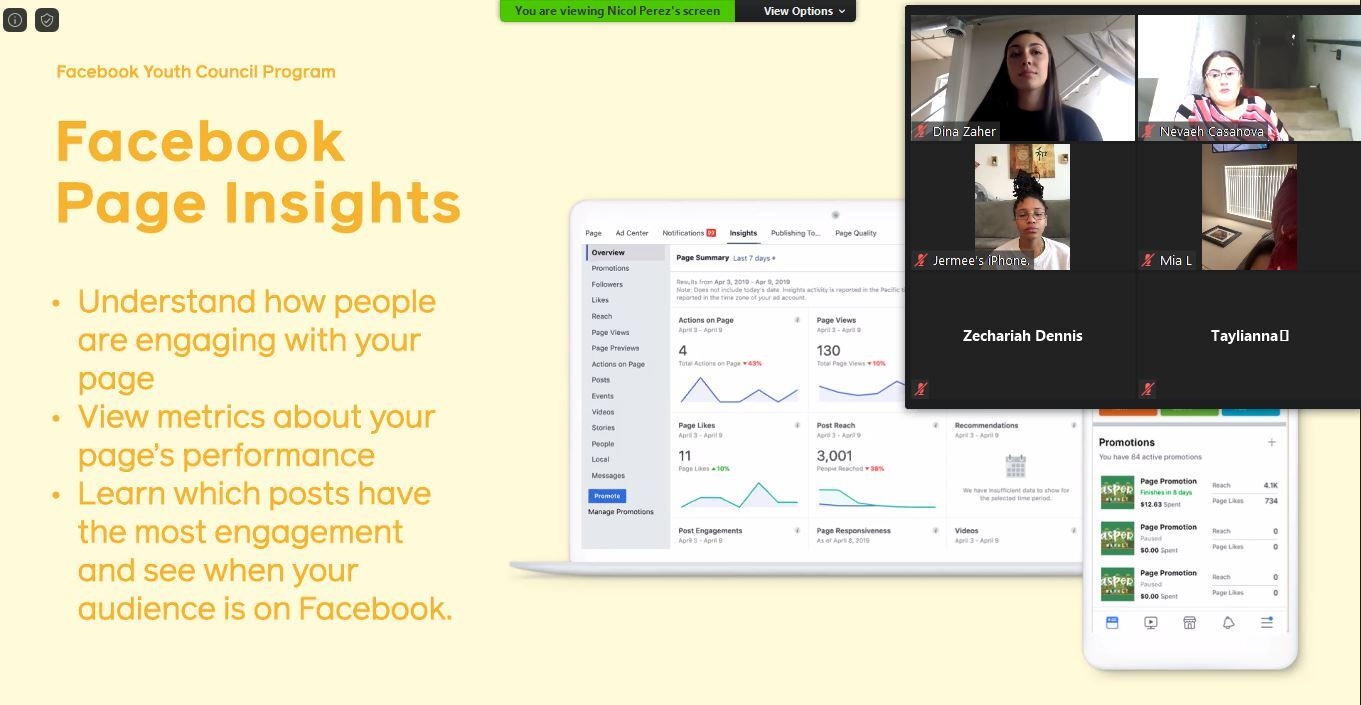 Neveah Casanova (top right) and other members of Denver’s Public Safety Youth Leadership Team participate in a social media training for youth councils run by Facebook and moved online due to the pandemic.

Like many teens, Nevaeh Casanova has had a strange few months: She graduated virtually from high school, is putting off college for a semester, and won’t be going into her usual job at the Boys & Girls club this summer. But she has a different job lined up: as a youth brand ambassador at the University of Colorado–Boulder, where she will be creating videos, social media posts and virtual events focused on youth gun violence prevention.

As someone who is fearful of gun violence in her own neighborhood, Nevaeh says she wants people to know that gun violence “isn’t worth it.”

“That’s where we keep falling out,” she said. “People just think ‘I’m going to do this and get revenge for this and not really think about the outcomes.’ You don’t know if he’s the dad and he has kids and they don’t have anybody else … and then they follow the chain.”

She is looking forward to using her experience to connect with vulnerable young people — even if it has to be online.

Fears of the impact of coronavirus have seen gun sales shoot up. Some first-time buyers say they’re turning to guns to keep their families safe, though the presence of a gun has been linked to an increase in violence.