Hydropower dams built without fish ladders have blocked migratory fish from the upper reaches of the Columbia and Snake Rivers for decades. 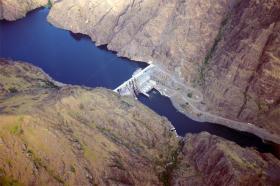 Tribal leaders from across the region gathered for the past two days in Portland to strategize how to return salmon to their full historic range.

The meeting ended Thursday on an optimistic note.

Northwest American tribes and Canadian First Nations presented a united front to restore salmon above Grand Coulee Dam on the Columbia River and to southern Idaho via the Snake River.

Shoshone-Bannock tribal chairman Nathan Small says on this he’s long felt like he was beating his head on a wall.

“Now I feel maybe my head is going to raise a little bit because there is that possibility to be talked about.”

Tribes and other fish advocates see opportunity to gain traction in two forums. One is the federal relicensing of Idaho Power’s Hells Canyon Project dams. The other is the pending renegotiation of the 50-year-old Columbia River Treaty between the U.S. and Canada.

But stumbling blocks remain. Those include ratepayer objections to the cost of getting salmon around very tall dams and degraded spawning habitat upstream.

The Army Corps of Engineers this spring will begin killing birds at some Snake and Columbia river dams to help protect juvenile salmon and steelhead.

The agency unveiled a plan Thursday that will allow as many as 1,200 California gulls, 650 ring-billed gulls and 150 double-crested cormorants to be killed.

The Lewiston Tribune says the action will occur at McNary Dam on the Columbia River and Ice Harbor, Lower Monumental, Little Goose and Lower Granite dams on the Snake River.

The ongoing issue with the cracked Wanapum Dam in central Washington is now creating a problem for migrating salmon.

Once upon a time, salmon and steelhead swam over a thousand miles upriver to the headwaters of the mighty Columbia River, at the foot of the Rockies in British Columbia.

In central Washington, state officials and farmers are scrambling to save orchards at risk of drying up because of a drawdown of the Columbia River.