The issue of whether gay marriage is legal in Oregon may not be settled after all. 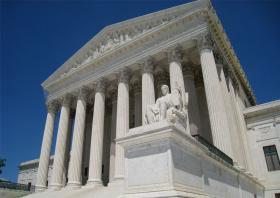 The U.S. Supreme Court is deciding whether to issue a stay on U.S. District Judge Michael McShane's May 19 ruling that overturned Oregon's same-sex marriage ban. Same-sex couples started getting married the same day.

The National Organization For Marriage is now asking the U.S. Supreme Court to put that ruling on hold while the group pursues its attempts to intervene in the case. Supreme Court Justice Anthony Kennedy asked attorneys on both sides of the issue to submit arguments on whether the court should issue a stay.

Carl Tobias, a law professor at the University of Richmond who's been closely watching same-sex marriage cases nationally, said Justice Kennedy could decide on his own whether or not to issue a stay.

Tobias added, "Or he may refer it over to all the justices, all nine of them, and I think rule pretty quickly. But we'll see."

Supporters of gay marriage have until June 2 to submit briefs in the case.