Under cloudy skies and among fallen leaves, about one hundred local veterans and their families gathered to honor the many generations of men and women who have served our country.

After Meridian Mayor Robert Simison thanked those who served and those who came to support their community, Major Kahli Gorski delivered the keynote address. Gorski is a native Idahoan and commander of the 124th Fighter Wing at Gowen Field. She is going on 20 years of military service with both the U.S. National Guard and the Air Force.

“[Veterans] truly are our nation’s heroes,” Gorski said. “And they’ll tell you they’re not, but every one of them holds a piece of our country inside of them.”

Major Gorski spoke not only of the sacrifice of veterans, but of their families and the communities that support them.

“Veterans are truly the lifeblood of this country. That does include their families. We applaud you. We could not go off and do the things we do without the support of our communities and families,” she said.

Following Gorski’s address, a rifle salute was given and two bugelists played taps. Shots rang across the park, and the wind danced with the flag, stars and stripes waving over those gathered below.

The event closed with a presentation of the armed forces medley, and veterans stood up when their branch was called. One young man belted the Marines’ Hymn and received a chorus of cheers and whistles in return. 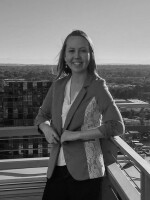 Abby Cheng
Abby is a creative writing major and senior at The College of Idaho. An Idaho native, Abby enjoys hiking, skiing and reading outside.
See stories by Abby Cheng
The Latest From Boise State Public Radio
You Know The Place
is back for another season of exploring the Idaho shops & spots you always pass by, but never seem to visit.