University of Idaho students react to alleged homicide near campus

During fall semester days, University of Idaho students usually rush around campus in heavy coats and boots to get out of the cold. But this week, the Moscow campus felt empty, with many professors canceling classes.

On November 13, the Moscow Police Department responded to a call of an unconscious individual on King Road. After arriving at the scene, they found four deceased individuals, and they were later confirmed to be U of I students.

At 1 p.m., University of Idaho students received texts in the form of 'Vandal Alerts,' which said, "Moscow PD investigating a homicide on King Rd. near campus. Suspect is not known at this time. Stay away from the area and shelter in place."

Megan Hill is a third-year student. She was in her dorm room when she received a text message on Sunday from U of I saying four fellow students were victims of homicide.

"I was worried that when we didn't know who it was, I have one friend who she's out and about a lot," says Hill. "I was really worried about her, and so I kind of texted them all first. I'm like, Where are you? Are you guys okay?"

Hill eventually got a hold of her friends.

Isaac Looney was at the campus eatery when he received the text. He says conversations about the situation broke out, and people quickly left for their dorms. The university sent a text message around 3 p.m., lifting the shelter in place.

Second-year Nevena Tulilov was on campus but says many students are going home early for Thanksgiving.

"I heard today in one of my classes that a bunch of greek life is super empty," she says. "Nobody wants to be on campus."

She says the university is sending texts and emails to keep the students updated, but she is unsure about the situation.

"I really feel like everything's super vague right now, and I'm not sure what to think of it," she says. "my roommate is very freaked out about the situation, and I feel like I'm resorting to apathy, so I'm trying just to ignore it and get back to normalcy. But it's just it's a very sad situation."

A candlelight vigil scheduled for Tuesday night was postponed until after the holiday.

The Moscow Police Department is holding a press conference at 4:30 p.m. Boise State Public Radio will keep you updated with the latest on our website and on air. 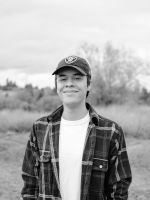 Richard Rodriguez
I'm Richard and I'm a summer newsroom intern. Currently, I am doing stories on a variety of subjects to get a better understanding of different beats. However, I would love to cover stories about diverse issues.
See stories by Richard Rodriguez
The Latest From Boise State Public Radio
weekly newsletter